The tournament schedule has been set as Bismarck prepares to host the top 13-15-year-old baseball talent in the country to Municipal Ballpark, Home of Dakota Community Bank and Trust Field, for the 2019 13-15-year old Babe Ruth World Series. The tournament is scheduled for August 7-15 and will have eight regional champions from around the country, a Bismarck team and a team from MLB China.

World Series tournament tickets are now on sale at the BPRD office, 400 E. Front Ave. Office hours are Monday-Friday, 7:30am-5 pm. Tickets options include tournament passes, day passes and individual game tickets for families, adults, students and youth. Ticket prices can be found here. Once the tournament starts, tickets can also be purchased on site at the Bismarck Municipal Ballpark an hour before game time. All seats are general admission.

Community volunteers are needed to assist with tournament operations and to welcome and assist the visiting teams. Volunteer opportunities exist throughout the eight-day tournament to sell tickets or souvenirs. Team Hosts are needed to be the “go to” person for a team’s coaches, players and parents. Team Ambassadors, boys or girls ages 13-15, are needed to connect with each team, attend their functions and attend their games. To find out more or to volunteer, please contact Ethan Eberle at BPRD at 415-0464 or eeberle@bisparks.org. 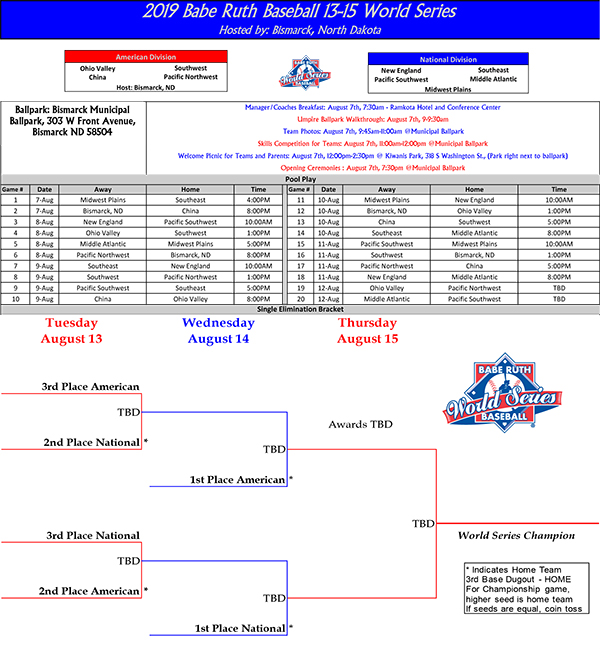