The World War Memorial Building, a downtown recreation center and a Bismarck Parks and Recreation District (BPRD) facility, has been named an official World War I Centennial Memorial. This distinction comes from the US World War I Centennial Commission and the Pritzker Military Museum & Library’s desire to name 100 memorials in 100 cities on the anniversary of the United States entering World War 1.

Because of this distinction, BPRD received a $2,000 matching grant to be used toward the restoration, conservation and maintenance of this historical treasure. The grant was submitted by Susan Wefald, Bismarck, Vice Chair of the North Dakota World War One Centennial Committee.

“Susan has long had a fondness for the World War Memorial Building, its history and story, and approached the Board of Park Commissioners with her request to apply for the grant,” said Randy Bina, BPRD Executive Director. “We so appreciate her and the committee’s interest in helping us continue to honor the history of the building, to maintain it and allow the community to use it.”

The World War Memorial Building was built with the support of Bismarck and Burleigh County voter approved bonds in a special election in 1929. The building was completed in 1930 and consisted of a convention hall, National Guard armory, gymnasium and additional rooms for community purposes. The timing of the building’s completion was appreciated when the North Dakota capitol building burned down in January 1931. The facility’s gym space and meeting rooms were used by the North Dakota Legislature that year. The first boy’s state basketball tournament was held in the facility in 1933, with Bismarck High School crowned as champions. 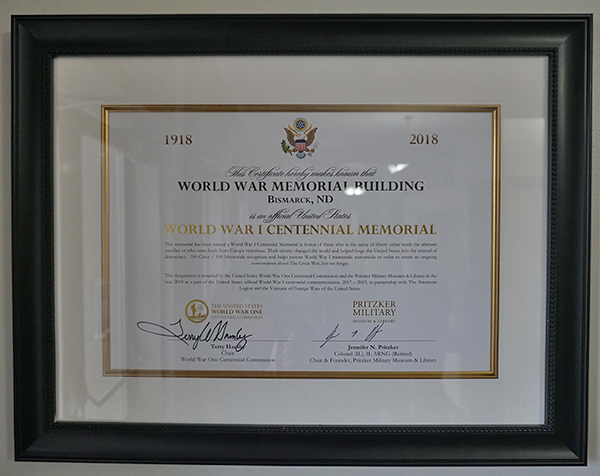